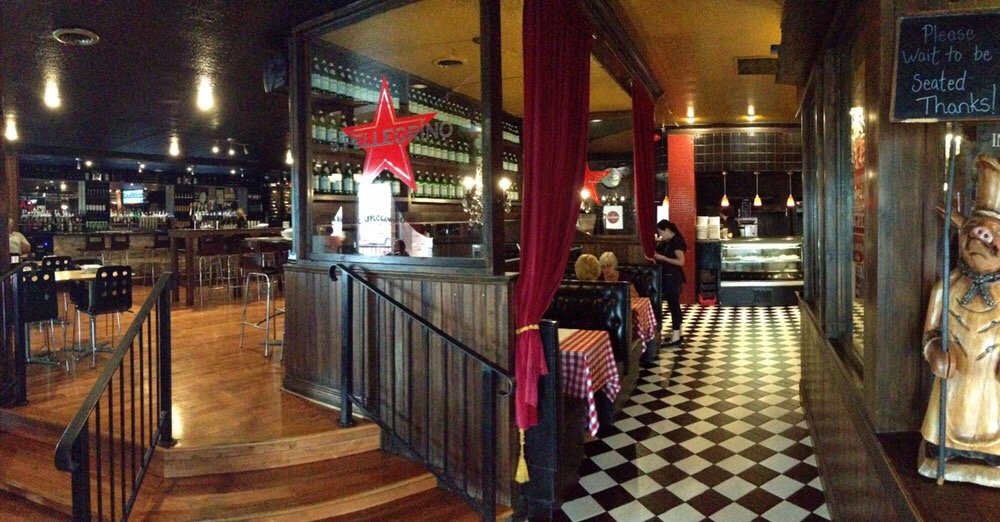 “The Place With The Salad”

A secret exists that can change your life.  That secret can be discovered if you take a little trip to St. Catharines, Ontario, ignore the bright neon lights of McDonald’s and Burger King, pull into Ridley Square, and step into Lina Linguini’s for one of the best meals you’ve ever tasted.

Unassuming from the outside, Lina Linguini’s is an Italian restaurant whose chefs have unlocked a flavour combination that revolutionized the way I eat after just one visit there a decade ago.

You see, I am a guy who loves food.  The bigger and tastier the portions, the happier I get.  When my taste buds crave a melty, cheesy meal or a rich chocolate snack, I’m not one to deny them those pleasures – calories be damned!  So, when a friend told me that Lina Linguini’s was starting a Wednesday night all-you-can-eat buffet, I was IN!  Visions of pasta, pizza, chicken, and garlic bread danced in my head, with the freedom to try as many varieties as my stomach could handle at this new restaurant.

With a healthy appetite and high expectations, I went with my friend to sample the wares, and let me tell you, I was NOT disappointed.  But I was surprised, as I’ll explain in a moment.

As we passed through the entrance, the atmosphere was notable from the beginning.  Low mood lighting, deep red walls, Italian posters, and dark wood everywhere established an immediate feeling that this was a place to come if you were serious about Italian food.  A large, mirrored bar was open to the left.  To the right stood multiple levels of booths and tables, creating a feeling of seclusion beyond most open-room style places.

We chose a booth, but before we could reach it to sit down, we were led down the middle of the restaurant; a walkway with a view of a brightly lit, triple level refrigerated dessert display.  Talk about mouth-watering!  Glorious tiramisu, decadent mousse topped with fresh kiwi and strawberries, flaky biscotti drizzled with chocolate and caramel…I thought I had been hungry before, but now my stomach audibly growled.

We sat, and opted for the buffet (obviously), and I got up to start off my meal with some salad and breadsticks.  Readers, you can probably tell that a man of my appetites does not tend to be a big salad guy.  I am no exception, but since I had all night, I thought I would give it a shot.  This is when I learned the secret that would revolutionize my diet for years.

This salad was delicious.  Sure, the lettuce was fresh and the tomatoes were flavourful.  They added chick peas (a food I had hated until that day), and it actually worked for the texture and taste.  But the knockout punch was in their homemade salad dressing; a sweet, fruity vinaigrette with a blend of herbs and oils that sent shockwaves through my tongue and into my brain.  If it had been socially acceptable, I would have moaned out loud with pleasure.

I could not get enough of this wonderful concoction.  That night, I went up to the buffet and sampled a lemon chicken breast, with a little salad on the side.  Excellent.  I grabbed a slice of thin crust, wood-fired prosciutto pizza…why not add a little more salad to my plate?  Mmmmm.  I stood in line while a friendly chef made me a custom pasta bowl with penne, chopped mushrooms, and juicy shrimp…and excused myself from the line for a moment to grab some more salad.

At this point, I was starting to feel quite full, and I knew that I did not have much room left.  On every trip to the buffet, I passed by that glorious dessert display twice, walking to and from my booth.  Now I pondered which tasty treats to try to finish the meal, and a thought occurred to me that I would never have imagined could enter my head:  “maybe I’ll skip the dessert and just have a little more salad”.

My friend laughed at me, but I can assure you that I did not regret this decision one bit!  When the check came, I chatted with the waitress (the staff are super-friendly), mentioned how much I had enjoyed the salad and asked what was in the dressing.  She told me that she couldn’t reveal the recipe, but that they did sell jars of it to bring home.  Game-changer!

Vegetables had not been a big part of my diet at that point.  Salads were healthy, but didn’t taste good enough to make at home instead of barbecuing cheeseburgers or popping a frozen pizza in the oven.  Until now.  Lina Linguini’s dressing makes me actually crave salad.  I make it at home now, for meals, at least 3 or 4 times a week.  My family buys me jars of this wondrous salad dressing as gifts on my birthday, and I am delighted to receive them.  Anything that can make me actually want to choose a healthy, veggie-filled meal instead of fast food is a major, major win, and Lina Linguini’s came through where nothing else had.

Now, do not let the take home option discourage you from eating at this restaurant.  I have been back dozens of times since my first night at the buffet, and I always leave satisfied.  Their pasta dishes are simply fantastic, with my favourite being the gnocchi parmigiana: fresh baked pasta with a delectable meat sauce and two kinds of cheese.  The portions are enormous, and even a big eater like myself is bound to leave with leftovers for lunch the next day.

But, whenever you order a pasta dish, it comes with unlimited salad on the side, and I am not ashamed to say that I have, at times, taken my entire entrée home for later, and just eaten the salad there.  You will surely find your own favourite dish to come back to again and again, but do take some time to explore the menu, as they have several standout options.  I didn’t learn this the first night, but in the time since I can confirm that those desserts are just as good as they look!

In the meantime, if you find yourself living a fresher, healthier lifestyle full of greens and vitamins, just remember that you heard about the secret to unlocking this change from me…courtesy of Lina Linguini’s!