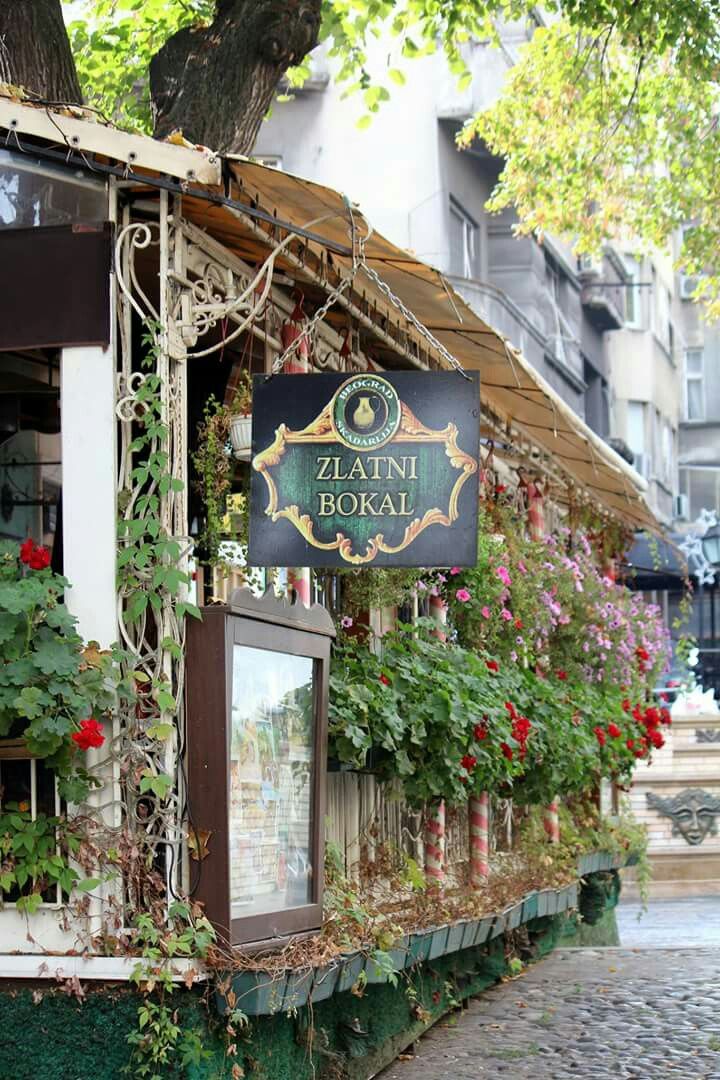 The Golden pitcher, located in the Belgrade’s bohemian quarter Skadarlija, is one of the most authentic Serbian restaurants. Its history reaches back to the beginning of the nineteenth century when firstly The Golden Pitcher was a popular wine cellar. Later it turned into a tavern, gaining the reputation it has today – as a restaurant.

There are several similar restaurants in the Bohemian quarter and to those who don’t have an eye for details or a nose for nuances of excellence, it may even appear that those restaurants are the same. But that is where you would make a mistake. They are all excellent, indeed, but one of them stands out.

These are some of the reasons why The Golden Pitcher is my favorite one. I will start with the personal – the least interesting one:

The Golden Pitcher is mentioned in one of my favorite songs. And considering that I’ve started listening to the music before I started eating at restaurants, that is actually how I found out that it exists. But think about it – once a restaurant is mentioned in popular art, it means something, right?

However, if there is one word that should be on your mind when you say The Golden Pitcher – then it is a tradition. Tradition is obvious from the moment you get close to the entrance to the moment you decide to leave.

Ivica, the main waiter, is always somewhere around the entrance ready to professionally greet you. But only if you are coming for the first time. After that, the greeting remains polite but it gets a personal tone, as Ivica is one of those old school waiters who quickly remember both your name and your story. To me, he is half of my experience and one of the reasons why I always come back. And he is a part of that tradition – he’s been working there for more than 20 years.

Serbs, and Balkan people in general, are known for their hospitality, so the amazing customer service in restaurants is expected and common. It is just that staff of The Golden Pitcher brings that experience up to the new level.

Another perfect example of following the tradition can be found in the menu: in fact, dishes are authentic to the extent that the English language does not recognize them, and the best you can do is describe them. For example, “Serbian raznjic” is described as “Grilled pork meat on the stick”, and honestly, as a huge fan of it, I think that any descriptive translation which does not include “mouthwatering” in the beginning is just a modest downgrade of the dish. “Cevapcici” are way more than “minced meat stick”, and “Pljeskavica” is much, much more than “Serbian burger”. Unfortunately, writing poetry in the menu is still not a thing, but if it was, this would be a job for Emily Dickinson, Allan Poe, or any other world-class wordsmith. Most of the traditional Serbian dishes include meat, but if you are vegan or vegetarian you can still enjoy some other cousins, like Italian for example, and order any of the appropriate salads or pasta.

The story about beverages is no different, and you could expect that of a restaurant that is called  “The Golden Pitcher”. As I have mentioned before, The Golden Pitcher was a wine cellar, which means that the “House wine” is something that you must not miss if you ever have a chance to visit. It is, of course, served in the pitcher, and it will make a poet out of you before you finish it. That, however, is not the only beverage you should try, I strongly advise “rakija”, a homemade brandy – if the translation is good. Speaking of languages, the amount of rakija you have and the number of languages you are fluent in, stand in a positive correlation.

And the last but not the least is the music. As a foreigner, you probably will not know any of the songs that are played by tambura bands, but if you know any old Serbian song, the band will know it. Tradition says that you order a song that is played by the band which comes to your table and plays specifically for you, and you are supposed to tip them generously. As a sign of gratitude, the band will stay next to your table for a couple of more songs, and if you keep giving them tips, they will most likely stay at your table the whole night. Of course, the whole restaurant enjoys the music, so keeping a band at your table for a really long time is not a common practice.

Finally, as the person who moved out of Belgrade to pursue higher education elsewhere, I realized that as time goes, there are fewer places that still mean something to me. However, if I went back for a day, or if I simply drove through Belgrade, that is a place where I would go without hesitation. If there is a place that feels like home, or like Belgrade in a nutshell, then that is “Zlatni Bokal” – The Golden Pitcher.

About author:
Ognjen K. (27) – a huge fan of wine, poetry, cats and putting one fake characteristic in a short biography. Currently lives in Berlin.